My 20’s: The Epic Adventures of the Bartenders Ball [Part 1] 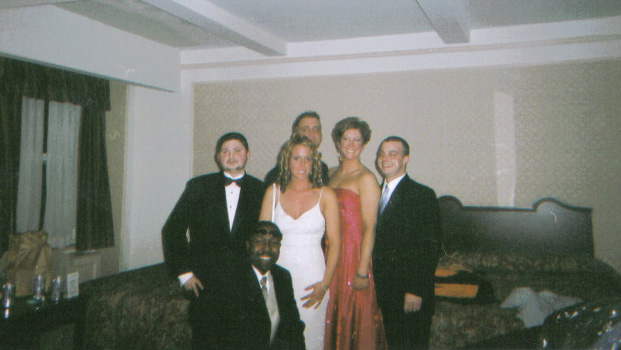 With possible Armageddon & my 30th birthday on the horizon, I’ve decided to dig deep into my well of memories and share some of my favorite stories from the last ten years of my life. FULL DISCLOSURE: While I will be as [karate] honest as possible in the retelling of these tales there will be certain things omitted due to a probable (more thank likely) drunken haze,  old-age forgetfulness, and the protection of the innocent. This will also be done in a very non-linear style, since whatever story I post will be based on what pops into my head first, not chronologically.

I’m realizing that a lot of these stories tend to focus on the latter half of my 20’s, but that’s only because that’s where most of my best stories come from. I say most though because there’s one epic event that helped define this decade for me, and that’s the Ocean State Bartenders Ball.

After I started working for the Ninety Nine Restaurant in the winter of 2002, the Bartenders Ball quickly became my holy grail. I had found out about the Ball through my assistant manager Larry, who was constantly talking the festivities up as THE event of the year. Not only was this soiree the equivalent of an adult prom, it was also a charitable event with all proceeds benefiting the Rhode Island food bank.

A pretty good excuse to get bombed if I do say so myself.

I was the novice, the babe in the woods, and the presumptuous rookie of the year as I began putting together my plans for the evening. My longtime friend JR would be my partner in crime for the evening, as we planned to drive to the Biltmore together to meet up with the rest of the Ninety Nine crew. I pretty much thought I had it all figured out, at least in my head.

Rookie Mistake #1. You never just drive to the Ball. Always be prepared to stay the night. Prepare for all contingencies, and your best bet will ALWAYS be to reserve a room (at discounted rates!). Many a rookie will tell you that they’re okay to drive, and that getting a hotel room is a waste of money, but rest assured if they’re telling you that, they’ve never been to the Bartenders Ball.

JR and I picked up our tuxes at the local tuxedo boutique in nearby North Providence, and we made our way toward the hotel to get changed in our co-worker Sherry’s room. There was a cavalcade of 99 employees classing up the joint that night, and we were representing in full force. Being a newb, I stood in awe as we arrived at the ballroom of the Biltmore. One of the other first timers, my dear friend Annette, arrived rocking her High School prom dress ready to go. The only problem? She was already piss drunk.

Rookie Mistake #2. Don’t go pre-gaming like you’re actually going to prom. A common mistake for many is that we sometimes forget that the entire event is stocked to the gills with alcohol at a VERY reasonable price ($1 a ticket, with beers being two tickets and mixed drinks/hard booze for 3 tickets). You’re getting fucked up at an event like this regardless, so picking up a 30 rack and throwing it in the hotel tub is probably going to end your night early. Like it did for Annette.

Poor Nettie was on her ass, falling out of her chair before dinner was even over. Her girlfriends carted her off to her room, and as the cliche goes “stick a fork her in her, she’s done.” As I laughed at her misfortune, I began sampling the different liquor vendors after grabbing a quick bite to eat (the event was catered by Johnson & Wales). Steve Smith & The Naked’s was the band for the evening, and they did a great job of pumping up the crowd.

My favorite thing about the Bartenders Ball is how happy everyone is. I’m convinced we could end gang violence by bringing the Bloods and the Crips to the Ball, and let them hash it out over some Grey Goose. Looking for some bipartisan politics? Forget the debates, just let them get on the dance floor with Steve Smith and company. Complete strangers will come up and buy you a drink, share a laugh, and enjoy the atmosphere with you. That’s how good the Bartenders Ball is. World peace is just a Ball away.

Without realizing it, I looked to my watch to see it was already 10pm. Feeling cocky and a bit bold, I uttered the famous last words, “I’m haven’t had enough to drink.”™

Rookie Mistake #3. Whenever you say you haven’t had enough to drink yet, trust me you probably have. After buying another $20 in tickets, I continued my drinking, unknowing of the belligerence I was causing. While I can tell you I don’t remember much from those post 10pm hours, I can tell you based on photographic evidence I definitely bit someones ass with full on bite marks and made inappropriate poses with a Mr. Potato Head.

As I was (sort of) leaving the Ball, I was propositioned by the woman who’s ass I bit, wondering if “I needed a ride.” Under normal circumstances I would have taken this as the true double meaning that it was but I was so oblivious to everything, all I could mutter was “Nope! All set, I brought my own car,” while smiling like a doofus. Was I being offered the sex? The world may never know thanks to me having my own damn vehicle.

Speaking of the vehicle in question, knowing I had too much to drink I told JR that I was in no condition to drive. Understanding, he offered to drive instead. Again, under normal circumstances I would have seen right through this and would have known JR had just as much to drink as I had. But drunken justification will allow lots of things to happen, so I relented. Luckily JR lived only 10 minutes away off of Westminster Street so it was a quick drive over from the Biltmore.

Once we reached his street, he warned me. “Listen, I’m telling you this now. There are about six stop signs on my street before we get to my house. I don’t plan on stopping at any of them.”

“If we get pulled over, I’ll take the blame,” he said stoically. I appreciate your honesty James Roy, but let’s be serious here. If we got pulled over, I’m throwing your ass under the bus so fast you won’t know what hit you. But that thing hitting you? It was me, driving a bus.

We survived the six stop sign obstacle course to finally arrive at JR’s, where I somehow managed to climb the stairs and make it to his recliner. I passed out around 2am, and woke up at 7am as we had to bring JR’s Mom to work. I can definitely tell you all these years later I was absolutely still drunk as fuck, and could taste every bit of the previous night in my mouth. And that included the glitter from the woman’s dress who’s ass I bit. At least I didn’t have to work, right?

Me? I was scheduled to work a double at the 99 Restaurant, and it was one of the most excruciating experiences of my life while having to serve people food when the sight of it made me want to vomit every… single… time. Realizing the potential lawsuit on their hands, Management cut me early from my 1st shift. Waiting for JR (he still had my car), I slept in a corner booth in a closed off section, he finally picked me up and brought me home to shower and rest before my 5pm closing shift.

Year two almost didn’t happen however, as I was in the midst of moving back home after my roommate moved out on me on very short notice. Broke and dejected, it was actually JR who bailed me out and got me my ticket to the Bartenders Ball for part deux.

JR and I had a falling out the previous month after he no showed an NCW wrestling event, our first event in two years. I was pissed and hurt, and he knew it but still didn’t necessarily care. JR can be a lot of things but at the end of the day what I can say is that he was a big part of my life growing up and I wouldn’t be the same without him, even if we aren’t close anymore. This was the beginning of the end for JR & I, but it was still a nice gesture in our longstanding friendship.

The Class of 2005 was a condensed group compared to the 04′ version, but we had a blast regardless. This was also the first (and only) appearance of the infamous Fitzy, and for those who have been around long enough to remember him know that he was always in a perpetual state of ‘drunk’. And even that’s putting it mildly.

My buddy Annette was unable to attend the 05′ Ball, but her best friend Jess ended up coming since she was working at the Cranston 99 at the time. Even though I was still pretty depressed about my money situation, Jessica definitely brightened my time and made it a memorable night for me. Though nothing ever happened between Jess & I, I look back on this night as a happy one, a snapshot back to a more innocent time in my life and a reminder to always take advantage of a “What-If” scenario.

Regrets, I’ve had a few.

Thanks to the events of last years Ball I was also able to better pace myself, having learned from my mistakes, and keeping myself on point for my Sophomore effort. JR had hooked up with the girl I had dubbed “skinny white bitch”, while Fitzy got drunk enough (didn’t take much) to begin performing the worm on the dance floor for Karen Adams of Channel 12 News. By the end of the night I was feeling good and had brought back from the brink of depression all thanks to the all-encompassing power of the Bartenders Ball. My co-workers Corrie and Abe let me crash in their hotel room, and I purposely took the next day off of work just in case. All was right with the world.

By the end of the event however I realized that things were changing, and the Ball was becoming less about my job and the people there and more about the experience in general. You didn’t need to work at a restaurant to enjoy the night, and if I was going to keep doing this, I needed to branch out and bring some new blood into the fold to reek some havoc. But little did I know,

One thought on “My 20’s: The Epic Adventures of the Bartenders Ball [Part 1]”