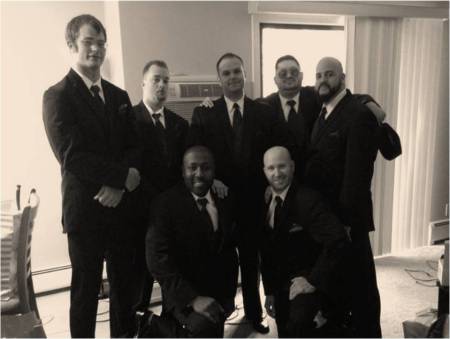 Well we’re at the halfway point of June, and already I’m running on fumes. To recap;

– After three long months I’ve returned to work following eye surgery, and all things considered that’s been the least of my troubles. Arriving at the mid-way point has left me with nothing more to do than catch up on 1000+ emails, virtual trainings, and finishing up my book. We’ll see what happens come July 1st when I receive the bulk of my previous assignments back and have a full workload ahead of me. The biggest shift with my return to Corporate America™ has been my schedule change. Due to some minor impairment while driving at night I’ve slid my work schedule to begin at 8am and BOY am I not a morning person. I don’t think I’ll ever be one. After a week plus of working my new hours I’ve found the worst part not even waking up but rather the commute into the office. Thank God I won’t have to worry about driving through Providence once I move. Speaking of–

– I have to move. With Rich leaving at the end of May to FINALLY move in with his fianceé I’ve been in a desperate search for a new roommate to no avail. I thought about going to the craigslist route, I present this evidence to the court for the pool of potential housemates at my disposal.

i have a nice clean room for rent to the right person. The room is in a frunished 3 bedroom apartment. It is an unfurnished room. If inter314seted pleas call TJ on ***-***-****.

Seems legit, but I would really like to know what the frunishings are. With my options limited I turned to my #1 (that would be Jon #1) for help since he was looking to move out of his townhouse in Walpole to be closer to his kids. He was unwilling to move to Rhode Island however, so it looks like July 1st I will officially be crossing over to become a MA resident. We’ll be close to the RI border though, so my commute won’t be so bad (and should be easier since I’ll be avoiding the awful highway traffic). “Ten Years Past Our Prime J-Quad House” here we come!

– June kicked off Wedding 1 of 3, as Richard & Kate got hitched after their ultra long engagement to officially become Mr. & Mrs. Pacifico. I was happy to be a part of their bridal party, though I did get bumped from groomsmen to usher by the aptly named Father Dick. I love getting the opportunity to be such an important part of my friend’s day but I’ll be grateful when Wedding #3 is done in October. Plus I feel like I should get some kind of discount from Men’s Wearhouse for the amount of money I’m dropping on their stupid fucking Vera Wang Collection. What I’m trying to say is fuck you Vera Wang.

– Finally, this week puts a pathetic cap on a relationship I’ve held in my heart for a long while now. It’s been a long time coming, but with ending on such a whimper it deflates a lot of what came before it. Sorry to be cryptic, but it is what it is.

Nick Stapp had to die so that @cpawrestles could live again. The cosmic ballet continues. #StewartDub #ThisIsTheDance #DejaEntendu
Favorite place to visit when I'm promoting in @dedhamsquare! Glad to be back on the ground. @thencw #NCW #BigCityRumble #wrestling #upcomingevents #Dedham #DedhamMA
Waiting for the rain. #Backto2Miles #thunderstorms⚡ #rain #walk
Well it is Tuesday... #tacos🌮 #tacotuesday🌮 #tacoflavoredkissesformyben
It's been awhile since I posted a food picture. So here we go, hello steak. @ghughessugarfree @zevia #steak #dinner #TGIF
I like to wear band shirts while I go house hunting so I can show some emo cred and if someone happens to say 'last night on the Mass Pike' I'll know it's kismet. @thegetupkids #TheGetUpKids #TGUK