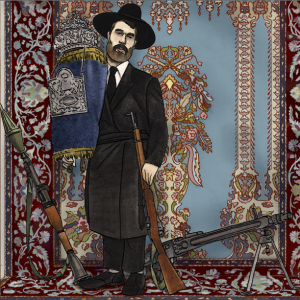 I love Say Anything.

Always have, and always will. I’ve explained previously what a profound impact Max Bemis and his lyrics have had on my life and Say Anything’s latest opus, Hebrews, once again infects my inner-ear, permeating it with the buzzing of its sublime sounds. I apologize if it sounds like hyperbole, but there isn’t an artist working today that I relate to more than Bemis, despite having never lived a life of bipolar disorder and drug fueled mayhem.

When “Six Six Six” was previewed leading up to Hebrews release I was immediately enthralled with the sound, especially after doing some digging and reading an interview with Max where he stated the album would have a completely different sound and feel, foregoing guitars in favor of an assortment of sting instruments.

“Six Six Six”, the first single from “Hebrews” premiered with Billboard! The song can be streamed here: http://bit.ly/PwRjvq

After picking up the CD my initial reaction to listening to all twelve tracks (in one sitting of course) was a bit lukewarm. It was still undeniably Max, and it definitely had more edge than previous works (Say Anything, their self titled third studio album specifically), but at the end of my session I felt like I wanted more from the album. It wasn’t until my third listen that I truly started to appreciate the songs, and the story Bemis was telling. Overall my favorite tracks include the terrific opener “John McClane”, “Six Six Six”, “Hebrews”, “The Shape of Love to Come”, and “Lost My Touch”. To me these are the most infectious tunes on the album, and ones I will be listening to years from now with the rest of my favorites.

In great Buzfeed tradition, I now rank my favorite studio albums from the band (this excludes the amaaaaaaaazing Baseball album and other singles that were apart of the SA Rarities album released in 2013).

Last night was the Say Anything tour at the House of Blues Boston and what a great fucking show it was! All the opening bands kicked ass (specific shout out to the So So Glos who really impressed me) and Max and crew blew the roof off HOB as they always do. Though I prefer Say Anything at a smaller venue, any time I get to experience this band live I am a happy camper. Plus I got to meet some awesome people, and sing my heart out with a fellow hardcore SA fan. Twas a good night.

Hebrews, House of Blues Boston, Max Bemis, Music, Punk, Say Anything, Say Anything Music, The Front Bottoms, The So So Glos