Bored with nothing to do on a Friday night I decided I would seek the infinite wisdom of Netflix to figure out what to watch this evening. Despite a massive list of movies I still need to go through I decided to see what was trending, and randomly post my thoughts in (mostly) real time. 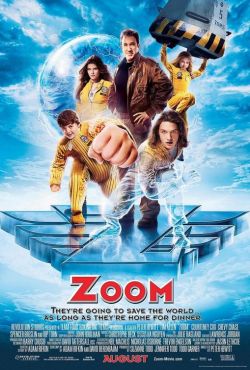 To my bewilderment ZOOM: Academy of Superheroes was listed, a 2006 family-friendly superhero movie starring Tim Allen and Courtney Cox. I can only assume this is trending because The Avengers was taken out of Netflix’s streaming library. No other answer makes sense to me, people were desperately in need of a Superhero fix and couldn’t stand watching the old Batman movies again (seriously I’ve watched them each about three times since getting added).

I’m not one to judge since my tastes are anywhere from Troma to Romantic Comedy. This could be a cinematic masterpiece hiding in plain sight.

⊗ HOLY SHIT IS THAT SMASH MOUTH? What the hell is Smash Mouth doing on a movie soundtrack in 2006? I’m pretty sure their cultural relevance peaked in 2001 with Rat Race cameo alongside Breckin Meyer & Amy Smart’s careers.

⊗ Potentially awesome origin story told via comic book panels = we have no budget for this movie. Both Watchmen and Wolverine: Origins (the only nice thing I’ll say about that Wolverine) had terrific opening sequences, brilliantly deflecting an overstuffed story with simple moments and music cues.

⊗ Fast forward to the present day and Chevy Chase is here! Man, it annoys me how much Chevy bitched about being on Community when he was featured in schlock like this. Rip Torn! Not a bad cast going on here, all things considered.

⊗ Meet-cute with the future ZOOMERS, or the Zenith Team, or whatevs. Little 6 year old princess girl has super human strength. We’ve got Spencer Breslin, who I LOVED in The Kid basically playing The Blob. Kate Mara, rawr. She has Jean Grey abilities, which adds up when it comes to female super abilities depicted on screen. Not-Taylor Kitsch is also hanging around as The Invisible Boy. I bet he’ll fall in love with Kate Mara. I betcha. And shouldn’t Mara be the invisible one (obligatory Fantastic 4 reference)?

⊗ I pause the movie and do what I always do, Googling the young actress Ryan Newman (Cindy) to see what she looks like ten years later (the movie would was filmed in 05′).

⊗ Courtney Cox tries seducing Tim Allen into rejoining the Super Squad by wearing a sexy green dress, then gets nearly hit by a car (driven by Chevy Chase & Rip Torn). It doesn’t really play very well for the audience, and they just kidnap Zoom instead after shooting him with a dart. A fucking dart.

⊗ I wonder if they knew that Flash has Professor Zoom in his rogues gallery of villains, who’s also a speedster himself? I’d wager not because I’m not sure these guys have ever read a comic book in their life. They know the tropes, as they keep throwing gamma radiation techno-babble and name dropped all the speedsters in comics (Flash, Quicksilver, uh… Superman) despite the fact that all the powered characters introduced in the film already have powers, and the gamma intensifies it?

⊗ Zoom’s evil gamma-bro is returning from the Phantom Zone (gamma zone?) pissed off and full of gamma.

⊗ It’s just dawned on me that this entire fucking soundtrack is Smash Mouth. What. The. Fuck.

⊗ I would say this movie was edited like a shitty Nickelodeon TV show, but I feel that would be insulting to Nickelodeon. The awful ZOOM ACADEMY (or whatever) logo cuts are the worst. 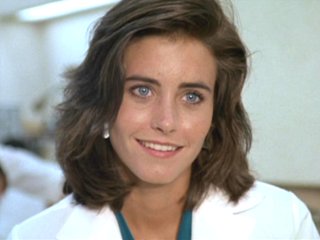 ⊗ I’m convinced Courtney Cox is playing the same character she played in Cocoon 2, all grown up and looking for some sweet Tim Allen love. She broke things off with Steve Guttenberg’s character once he went back into the police force after his old Captain needed help at the Academy. Things were truly over between the two when he found out she was a **SPOILER ALERT** mutant with weird rainblow™ super powers **SPOILER ALERT**! Maybe Wilfred Brimley gave her the abilities via oatmeal.

⊗ They are REALLY glossing over the whole training montage/bonding/team coming together, and the best way to showcase how much Zoom cares is to take the kids out in a spaceship (!?) along with their own Johnny-5 (Guttenberg reference #2) to get Frosty’s at Wendy’s (product placement or bust). Oh and is that Squiggy as the drive-thru worker?

⊗ Is Chevy Chase a bad guy? I can’t tell… I’m thinking he was told to emphasize his character having an internal conflict based on his past relationship with Zoom and the original Zenith team, but fuck it. Let’s go 110% slapstick.

⊗ I’m also convinced Tim Allen took this gig hoping he’d have another Galaxy Quest on his hands. “I don’t think so Tim.”

⊗ The team comes together, Kate Mara and Not-Taylor Kitsch hook up (PG style), and the group gets their own hero names. No need to let this breath though, because we can’t let this puppy go longer than 90 minutes. TO THE THIRD ACT!

⊗ I’m a little confused on this whole bit, so bear with me. In the very beginning of the movie Zoom is shown to use his super fast powers to blend his drink. So that’s establishing he never lost his powers, right? He just lies and tells everyone he lost his powers after his entire team is brutally murdered by his psychotic evil brother who somehow gets banished to another dimension. Heavy stuff and a great reason to suppress your powers and go into hiding. But then he’s able to save Cindy in the nick of time, and it’s made to be a huge deal about his powers being back. So did he only partially have his abilities? Ah fuck it, if the writers didn’t care neither did I. What do you think Tim?

⊗ The heroes save the day, sort of… Concussion (Zoom’s bro) no longer has red eyes and is thus good again. Nothing is mentioned of the slaughter of his old team, Zoom’s  girlfriend, and the countless other civilians that probably suffered a horrible fate due to the actions of Also-Not-Taylor-Kitsch. Everyone hugs and meets proper.

⊗ Smash Mouth brings us home, and we roll to outtakes as if this movie was so beloved we’d want to spend another 5 minutes “hanging out” behind the scenes. In every scene Tim Allen is shitting on Courtney Cox, so that makes it a little more bearable.

⊗ Overall, this was a fairly lightweight movie despite the lack of laughs and the surplus of Smash Mouth, and I look forward to the gritty reboot in five years. I can’t believe I wasted nearly 1200 words on this “film”.

⊗ And despite the bomb when it’s all said and done Tim Allen still had those lucrative Santa Clause movies to latch onto. No one was going to take that away from him.