This past Sunday saw the fourth episode of Game of Thrones’ brutal sixth season, “The Book of the Stranger” air on HBO nearing the halfway point of the season and inching ever closer toward their series finale.

In the wake of another shocking episode from the incredibly popular/reviled/beloved/loathed series based on “A Song of Fire and Ice” by George R.R. Martin, the erstwhile writer was asked what would be happening next now that Game of Thrones the Series was operating beyond the written words of Martin, especially with the eventual (inevitable) release of his sixth book (“The Winds of Winter”) still coming (much like winter).

I’ve never read the densely written books by Martin, and I was late to the party on watching Game of Thrones in real-time, so early last year I blew through the previous four seasons after obtaining access to HBO GO, giving me the unique opportunity to watch GoT Season 5 in real-time, much like I did with Sons of Anarchy in their final Season.

Thankfully Game of Thrones is no Sons of Anarchy, and this show exceeded all of my lofty expectations. Considering the insane hype my friends heaped on this series, I was sure I’d be disappointed. That disappointment never came for me, except for the depressing fact that we only get ten episodes a season. 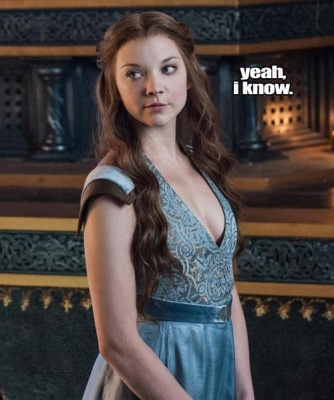 Season six has been working at a breakneck pace compared to previous years, tying up loose ends and literally killing off plot points that won’t be important to D&D’s endgame (bye-bye Osha). Jon Snow’s resurrection may have been the worst kept secret in Westeros, but even that story has been given its gravitas and due, being the absolute best parts  of the season for me so far.

Besides the fleeting moments of seeing Queen Margery, of course.

I could sit here and bore you with my analytical opinions on the series, the books, the differences between the series and the books, and the tropes of fantasy television as a whole but honestly that bores me just typing it. Instead I wanted to take an excerpt from a daily conversation I have with my-worker and Cozmick Twin Siobhan that we had Monday morning after “The Book of the Stranger” aired. It perfectly sums up my excitement and hope as we continue to barrel towards the finish line. I’ll probably revisit things once we reach the season finale in June.

This also gets pretty weird, I’m sorry in advance.

JCH: well
good for you
instead
you should watch GoT

JCH: YEAAAAAAAAAAAAAAAAAAAAAH
I was so happy
because I was sure they were going to miss each other completely in typical Game of Thrones fashion

Sio: LOL oh yeah, i was too

JCH: I’ve also never realized I wanted Tormund and Brienne together until last night
Now thats all I want is for them to rule the 7 kingdoms with Podrick

Sio: LMAO
i loved that scene

JCH: Ramsay better be dying at the end of this season
He’s like TOO evil at this point
And he hasn’t even raped Rickon yet.

Sio: LOL
yeah, but that’s how we felt about Cersei

JCH: I mean, I still want Cersei ded. Especially since I feel like her big plan is to get the Sparrows to kill my bae Margery and then get the High Sparrow killed by the Tyrell army in retaliation… But my poor boo.

I will be furious

JCH: But the evil things she’s done has been filled with shades of grey… Ramsay has been pretty much the typical moustache villain with extreme violence like cutting off diks, r a ping Sansa, feeding his baby brother & step mom to the dogs, killing Daddy, and now stabbing Osha in the neck.

Sio: yeaaaaaaaaaaah
he’s pretty awful
for no great reason
Cersei at least had her reasons

JCH: Right… Cersei you can always argue was “for family”
Or because of her prophecy given to her by the witch in the woods
And because she loves her bro’s dik
I get all of those things
For sure
ESPECIALLY the last part.

JCH: I just hope Jon Snow & Sansa kill Ramsey together
and then start boning
O_O
BECAUSE THEY ARE JUST COUSINS I KNOW IT AND NOT REALLY BRO & SIS AND IT WOULDN’T BE SO AWK BECAUSE INCEST IS TOTES A THING IN THIS WORLD OF WESTEROS AND GEORGE RR MARTIN.

Or Pod can be with Sansa
I’d watch that too.

Sio: LMAO
its totes fine
3some!

JCH: OMG.
Game of Thrones needs to get on this stat
Like Sansa getting on that dik
ifyouknowwhatimean

Sio: I DO
you mean
getting on that dik

Sio: YASSSSSSSSSSS
i love him

JCH: What’s his game (of thrones) though?

Sio: all the power

JCH: ooooooh.
Did you watch the previews for next week?

JCH: Littlefinger is confronted by Sansa & Snow (this fall on TNT)

JCH: I hope he’s got a good plan to talk his way out of that one, because Jonny B. Snow is all about killing fools who’ve crossed him.

Sio: HE IS
now that he died
he DGAF

sir
i am cold

JCH: I figured the coffee would warm you
Like the burning fires filled with the screams of the Dohtraki Kals

Sio: LOL
i wish
its iced

JCH: Ah
So like the Wight Walkers in the deepest pits of the North

JCH: Well
Maybe you could warm up by putting on some pants?

JCH: Well. I tried.
My work here is done.
And now, my watch has ended.

One thought on “TV REVIEW: Game of Tropes & the 6th Season Slaughter”