The Assassination of Jimmy McGill by the Coward Saul Goodman

While the idea of a pre-Breaking Bad Saul Goodman running around the ABQ working cons and hanging out with Mike The Cleaner seemed like a perfect pallet cleanser to the grim adventures of Walter H. White, the utter tragedy of AMC‘s original series Better Call Saul is knowing the inevitable. Shockingly it’s not because of the usual issues with prequels (Star Wars, Oz the Great & Powerful, Prometheus) but rather the incredible job Peter Gould, Vince Gilligan, and Bob Odenkirk have done to make us care about the fall of Jimmy McGill.

As I anxiously await season four of BCS (premiering August 6th on AMC), I sit here prepared to argue that Better Call Saul is now the better show than Breaking Bad, something I couldn’t fathom even at the end of Saul’s first season. It would be heresy to claim such a thing just a few years ago, and while Breaking Bad will continue to be one of my favorite television series of all-time (I just finished my 4th re-watch in preparation of Saul’s season premiere), but in the end Walter White was not a good man– But Jimmy is.

I don’t care about antiheroes, and thanks to Tony Soprano antiheroes were EVERYWHERE during this new golden age of TV. Vic Mackey, Jax Teller (FUCK YOU SONS OF ANARCHY), Don Draper, and of course Walter White (Bryan Cranston) dominated the television landscape. By the end of Breaking Bad (hell by early season two) Jesse Pinkman (Aaron Paul) was my guy and my one hope was to see him make it out alive and well.

Walt deserved everything he got by the end of Breaking Bad, though that meant collateral damage for everyone in his orbit including poor Hank, GOMIE, Skyler, Flynn, Jesse, Mike, and of course his CRIMINAL lawyer Saul Goodman. Everyone was punished for the crime of knowing Walter White, and in the end there were no winners.

Coming into the first season of Better Call Saul I thought it would be a very short trip from Jimmy McGill to the titular Saul. After all we knew everything there was to know about Saul Goodman. In his first appearance on Breaking Bad (season two’s “Better Call Saul”) he tells us his real name and everything we’d need to know about the character through his actions and words. When I first watched season one of BCS I was somewhat frustrated that we weren’t getting there fast enough.

“ARE WE THERE YET? WHY ISN’T JIMMY SAUL? IT’S NOT CALLED BETTER CALL JIMMY!! WHERE’S HEISENBERG?!” 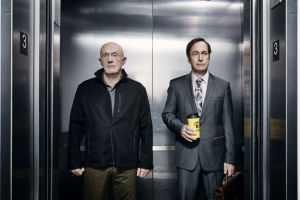 That was the brilliance of Gould & Gilligan and their new creation. They didn’t need to rush to their destination. They could take their time with the journey of Jimmy McGill and were in no rush to tie things up into the Breaking Bad timeline. The black and white flash forward to Jimmy’s life as Gene is a subtle tease for BCS’s future, but it’s the leisurely pace that’s taken with Jimmy’s combative love/hate repartee with Chuck, his beautifully restrained relationship to Kim, and his antagonistic blow ups with Mike Ehrmentraut that makes Better Call Saul such a pleasure to sit through. While Walter White was allegedly a decent family man turned bad, BCS is a story of a truly good hearted man chipped away to nothing. Saul is a shell, and he was created by shitty circumstances, heartbreak, and bad luck. Jimmy McGill does some bad things in his first three seasons, but they ‘re usually for a greater purpose all while chasing the chance of “Breaking Good”.

Now Chuck is dead. Kim is injured and compromised, and Mike has gotten into bed with Gustavo Fring. Season four of BCS is bound to be the most Breaking Bad like season yet, and that bums me out. A part of me wishes this could be an alternate timeline where Jimmy earns the respect of his brother, marries Kim, and becomes little Kaylee Ehrmantraut’s godfather while wacky next door neighbor Jesse Pinkman stops in to say hi.

But alas we know Jimmy is “dead” by the time Badger gets busted for dealing the crystal blue in 2008 and needs a lawyer to get him out. That means while we’ve been introduced to the concept of Saul previously on BCS, by the time season four rolls around Jimmy may be no more. With Chuck gone, all bets are off in how the characters deal with his death. What happens to Jimmy and Kim? I’m scared to find out.

Re-watching Breaking Bad under the prism of Better Call Saul also shines new light on scenes with Saul Goodman. In almost all of Saul’s scenes with Jesse we see a warmth and caring that Saul has for Jesse. Wanting to see him get clean, reconnecting him with Andrea and Brock, hiding him from Gus and Mike. Despite being a bad guy, Saul does a lot of small things to show he still cares (as long as he gets his cut). Yes, he helped poison Brock… But he didn’t KNOW the kid was gonna get poisoned, that’s all on Walt. Maybe there still is a little bit of Jimmy McGill left under all that Saul veneer. Maybe Gene ending up in Omaha is more than happenstance (Kim was born and raised right next door in Kansas after all), and maybe there’s more to see in that post-Breaking Bad world.

Perhaps the reports of Jimmy McGill’s death were greatly exaggerated after all.

Check out this great conversation Alan Sepinwall had with Vince Gilligan over at Rolling Stone before Better Call Saul Season Four.

Loving my @mahoningdriveintheater tee. Thanks for picking it up @chanthomaspro! #TheLastDriveIn #DriveIn #JoeBobBriggs
Cool @paulalhl62 does it again. Delicious BBQ Chicken with sugar free BBQ sauce. Mmmmmmmmmhmmm. #dinner #bbqchicken
Quiet mornings on the porch. I'm slowly becoming an old man. #home #homeowner #porch
Taking it day by day.
With the weather turning I'm enjoying the prospect of quiet nights relaxing outside on my porch (front or back? Dealers choice)
A little country fried steak in the city. #latedinner #countryfriedsteak #zevia