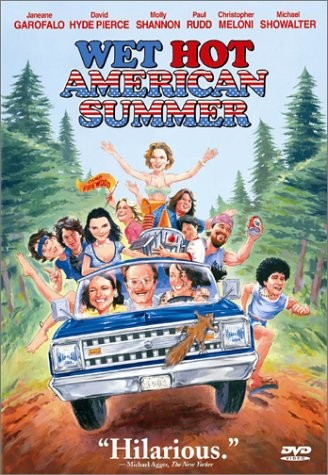 Without the awareness of what we were about to get into, Carolyn and I traveled down to the local hipster stretch of Ocean State land known as Thayer Street to check this little flick out. Still a burgeoning Cinephile, I was looking for any excuse to go to The Avon back then, with this being my first trip. An old-timey theater dating back to 1915, the majestic independent cinema customarily shows old trailers mixed in with newer material beforehand, providing a unique experience unlike your regular corporate chain. If you’re ever downcity and have some time to kill, a trip to The Avon is always encouraged.

From the opening seconds of Wet Hot, things Are Not What They Seem as the gang of counselors from Camp Firewood rock out at an all-night rager deep within the woods of Maine. The amazing music, era-appropriate outfits, and over the top acting immediately had both of us turn and mouth “WTF” to each other. I fucking loved it.

Having been raised on Airplane and The Naked Gun I was well aware of spoofs, yet Wet Hot American Summer transcended everything I had known about the genre and raised it to another level. While something like Scary Movie made me laugh (and it DID. The first Scary Movie is genuinely great), it couldn’t hold a candle to what David Wain and Michael Showalter achieved with this dinky little movie about the last day of summer camp in 1981.

Things didn’t start off too crazy, but from the moment Showalter’s Coop wistfully whispers “I want you inside me,” as Marguerite Moreau’s Katie walks away toward the mess hall you knew that these guys intended to throw everything at the screen to see what sticks.

And holy shit does it stick. To narrow down all the amazing characters, moments, and dialogue would be a disservice to the movie. But I’ll try. Rudd’s take on the ultimate jerk boyfriend Andy. Chris Meloni’s fucked up cook Gene and his dysfunctional relationship to a can of vegetables. The trip into town, the gournal, Ken Marino and Joe Lo Truglio’s entire subplot featuring the greatest chase scene in cinematic history. “THE PHONE, THE PHONE, WHERE’S THE FUCKING PHONE?!” Michael Ian Black ramming Bradley Cooper in the athletics shed. Gene training Coop, and the entire talent show leading to the greatest double take in cinematic history.

Again trying to describe this movie is nigh impossible, and I’m not nearly funny enough to articulate all the ways this movie shaped my sense of humor over the years and informed my clique’s entire lexicon of movie quotes.

I will say that one of the best things this movie does is subvert every expectation of the typical summer camp coming-of-age tale then subverts THAT expectation on top of it. After Coop wins the girl in the talent show finale, the epilogue smashes everything to pieces and makes what came before it irrelevant (and hilarious) when Katie and Coop say their goodbyes before heading home.

“Listen, Coop – last night was really great. You were incredibly romantic and heroic, no doubt about it. And that’s great. But I’ve thought about it, and my thing is this: Andy is really hot. And don’t get me wrong, you’re cute too, but Andy is like, *cut*. From marble. He’s gorgeous. He has this beautiful face and this incredible body, and I genuinely don’t care that he’s kinda lame. I don’t even care that he cheats on me. And I like you more than I like Andy, Coop, but I’m 16. And maybe it’ll be a different story when I’m ready to get married, but right now, I am entirely about sex. I just wanna get laid. I just wanna take him and grab him and fuck his brains out, ya know? So that’s where my priorities are right now. Sex. Specifically with Andy and not with you.”

This movie gets me.

When the ten year anniversary of WHAS came about in 2011, I was desperate to go back to that nostalgic moment in my life and attempted to get an anniversary showing at either the Avon or another local theater. While ultimately I failed in my mission, I got the small thrill of corresponding with a comedy genius for a short time. Bully for me.

13 years later Wet Hot American Summer: First Day of Camp debuts July 31st exclusively on Netflix, and honestly I just want to take the whole day out of work and binge the shit out of this prequel series chronicling the 1st day of summer camp 1981. It brings me back to that summer night in Providence and gets me excited for what this insanely great (and mega-famous) cast has in store for our return to Camp Firewood.

My Trapper-Keeper has kept this appointment open for a very long time.

Day 2 - Probably the oldest wrestling shirt I still own. Cost only $19.99 with one cent Mike Dutch tax. #ProWrestlingTees #teeshirts #tshirts #Mayhem
The only reason to shower right now is to film @thencw promos behind a bedsheet. I'm doing fine.
Day One of JC's Wrestling Tees. Love my sick ass 1989 CPA tee shirt almost as much as I love @nickstappokay. #ProWrestlingTees #TSwift #CPA